Welcome to Lockehill's News and Brags

this page was getting too long so Agility News is on the Performance page and I must delete old news because my server is complaining!

Atwater Chosen Family Ties "Tye" took Best of Breed for a 4 point major Saturday morning under Judge Jo Virden. Sunday he won Best of Winners for a 4 point major under Brenda Miramon. Atwater Crimson Lights "Sky" went Winners under Robert Kelly for a 4 point major. Congratulations go out to Dan and Allana on breeding and handling this fine group and to Barbara Wright "Chosen Shelties" Tye's co-owner, on these great wins.

Jnne 23. 2017: Lockehill Careless Lucinda "Lucy" has become forever young, she passed away today at 16.5 years of age. Such a fun, kind, loving sheltie. My thanks forever to Diane and Gary Rath for giving her a fantastic retirement home full of love and good health. She is shown below as a pup, at one year old, and as a young adult shown by Allana Hemenway to a Best of Breed.

Lucy was Fanny's (Lockehill's Careless Pleasure) daughter which was where she got all her good humor and size. Her sire was Ch Kismet's Tallisman II, ROM. As a youngster she won Specialty Sweepstakes and a few almost wins. She did win a Best of Breed before we found she no longer would fit under the wicket.

November 29, 2016: Today I must announce the passing of my beautiful Ch Lockehill Careless Lillianna (Ch O'Davak Justice Prevails ROM x Ch Lockehill Careless Carlotta). Kathy writes: "The inevitable finally came to pass. Lillie made it to 17 and even to my birthday on Nov 27 in reasonably good health, but she suddenly took a turn for the worst and we had her euthanized yesterday. I have cried buckets, of course. Thankfully, Art took her to the vet to spare me witnessing the life go out of her." Shown below with Kathy celebrating her seventeenth birthday with a toast to good health and a wish for many more years. Kathy and Art Adjemian took Lillianna for her retirement ten years ago and loved her the rest of her long life.

Lillie finished very quickly much to the relief of everyone ringside. I was showing her sister BISS CH Lockehill Belle Dela Noche during the same period and would hand Lillie's lead to people ringside who soon learned she was going to bury her head into their tack box, purse, or whatever else she could reach. I suddenly had no helpers ringside....no one wanted to try and coral Lillie. I showed her to her first Specialty Major and to several points and then she went to Allana Hemenway to finish while I showed her sister Belle. Lillie loved everyone and was a pure pleasure ....well most of the time. She loved the show game, finished with a specialty major and took Best of Breed with all her remaining points. She produced one champion, Ch Lockehill Careless Summer who was owned and finished by Allana. Summer also produced a champion and is behind many more.

Lillianna is shown below taking Reserve (with Allana Hemenway) to Belle who was Winners and Best of Opposite under breeder Judge Charlotte Tull at our AASSC Specialty. Allana took Lillie out the next weekend to finish her championship. Belle finished that year with a major win at the Dallas Specialty. Her brother Ch Lockehill Special Edition "Kahlua" also took the major under Al Bianchi. It was the first time I had won Winners Dog and Winners Bitch at the same show. Kahlua won his championship completely owner handled while I took all but one point on Belle. 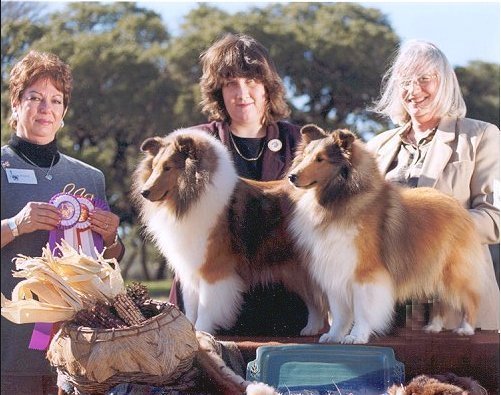 Copyright © 2011 Lockehill. All rights reserved.
Any reproduction of images or logos is strictly prohibited.